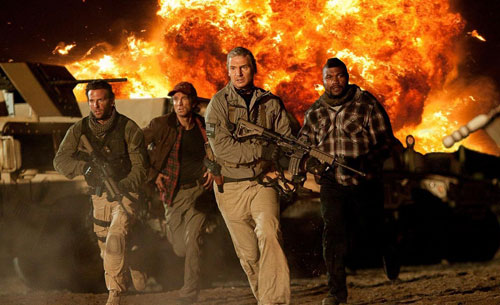 To answer that question, let me start with a short story.

My husband and I have this slightly guilty pleasure.  We like watching movies that have almost no socially redeeming value.

We both have fairly intellectually demanding jobs, so on Friday nights, we like to go to the theater or sack out in front of the TV, check our overworked brains at the door and go watch something that doesn’t require ANY thought whatsoever.

It’s a nice way to turn off the brain and “reboot” for the weekend.

One movie, however, accidentally got me started thinking again. We were watching the A-Team movie – a remake of the old TV show with Colonel “Hannibal” Smith (Liam Neeson was surprisingly good in this role, by the way) and his band of misfits and weirdos who defeat the sneering, horrible bad guys. Of course there’s a lot of car chases and lots of things that blow up in fiery explosions.

At one point, while the team is preparing for an operation and stockpiling explosives, the cigar-chomping Smith philosophizes:

The analytical part of my brain (which I had not yet succeeded in turning off) was taking notes on how meticulously this team planned their missions.  Their success and their reputation for being the best covert ops team was not accidental, it was the result of investment and hard work.  The image that they embraced (and actively cultivated) was very casual, or even crazy compared to more conventional military units,  but that image contradicted the facts. the facts.

In the movie, the team spent hours poring over maps and drawings. They had invested time in training and insisted on the best equipment. When they couldn’t get the best equipment, the improvised with what they had on hand, but they started out well-equipped.  They spent the time it took to perfect their skills. They were willing to do what it took (even things they really didn’t want to do.) And they prepared for multiple outcomes from every encounter.

Despite the “image” they projected, the characters were all very skilled, hardworking professionals.

When we outline our marketing recommendations and outline a complete marketing system, business owners often ask us – is all this really necessary?

Can’t we get by with doing less than all this?

“Getting by” is not a worthy objective for a professional.  And the forces working against you are too many and too powerful.  Casual, half-hearted, non-committal efforts; or “random acts of marketing,” are rarely successful.

How do you counteract all that?

Some would call it overkill. We just call it a good marketing plan.

We love it when a plan comes together!