How Watching “The Blacklist” Can Improve Sales

How Watching “The Blacklist” Can Improve Sales

Raymond Reddington of NBC’s “the Blacklist” seems an unlikely hero in an era when spy dramas are full of cgi car chases and supernatural martial arts skills.

The scene opens on a darkened roomful of good guys and bad guys in an eerie warehouse in the bad part of town.  The tension is high and you sense that this is the moment just before the bullets start flying.

“Red” Reddington is a Consummate Storyteller.

Raymond “Red” Reddington strides confidently in the room his assistant Denbe at his side.  He flashes a high-beam smile at the assembled crowd, throws his hat down on a chair, and starts telling a story.

“Steve!  I’m delighted to see you.   It’s been ages.  You know, this reminds that time in Namibia.  A woman I was dating was so convinced there was a bomb in a package that she threatened the mailman with a bowling pin.  You know, she made the most amazing pie crusts . . . ”

The Parable of the Farmer from the Blacklist

What’s remarkable about Reddington’s character is that he doesn’t (usually) pull a gun, (at least not right away) he doesn’t raise his voice or show anger, and before anyone realizes what has happened, he has taken control of the room, using nothing more than an affable presence and a finely-honed skill for storytelling.

And by the time he finishes his story, most likely the good guys, and bad guys (according to the story line, Reddington is a bad guy, although that’s easy to forget because he is so good at it) are placidly, if bemusedly, doing Red’s bidding. At least for the moment.  People have begun to know, like, and trust him, in spite of his reputation, and in spite of their own agendas.

In real  life as well as on TV, storytelling is a fantastic technique for convincing people to do what you want. Or at least, getting them to stop and listen to you.

The success of the show itself is evidence of the power of great storytelling.  (Even TV watchers love great stories!)

On May 11, 2014, owing to the show’s breakout success, NBC announced the show would air an episode in the coveted post–Super Bowl timeslot in 2015.

The show has received critical acclaim, with many critics praising Spader’s performance in particular.

Why is storytelling so successful?  (And more importantly, how can you USE this to be more successful with your sales and marketing efforts?) 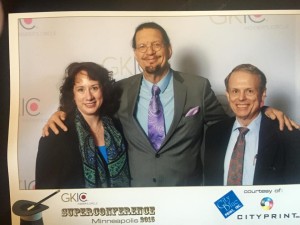 James Spader is not the only gifted storyteller we’ve seen lately.   We had the opportunity to see Penn Jillette (of Penn & Teller) at the GKIC Marketing Superconference last week in Minneapolis. There is another man with amazing storytelling skills.

While people think of Penn & Teller as a magic act, the real talent comes in great storytelling.  Penn Jillette started as a street performer. He used stories and humor to draw a crowd, to explain each “trick” as it was being performed, (magicians notably call this “selling the trick”) and, most importantly to the success of a street performer,  to get people to actually want to give him money at the end of his act. He was so successful that his accountant was certain he was selling drugs or doing something illegal.  (Like, street performers make enough money to need an accountant?)

Here’s why they work:

Of course it helps if you have the supreme confidence,  resonant voice  and comedic timing of James Spader on a sound set (with a staff of fantastic writers working frantically to make him so delightfully villainous) . But even without those advantages, you can benefit from incorporating storytelling. And like most skills, the more of it you do, the better you get at doing it.

Of course, you should provide great information in your sales and marketing materials and presentations.  Some will say that the best salespeople should be teachers. (I’m one of them.)

But if you remember from when you were a kid, the best teachers WERE the great storytellers!

Let’s get started selling more of your products by telling great stories: