How do you start an aviation business? Particularly when no one has blazed a trail for you, because there are no big competitors already providing the service you wish to provide?

Lindsay Dyer has started a very innovative business model as an independent flight dispatcher for companies that may not want or need an in-house dispatcher.  The mission of her company, LD Aviation, is to help small to mid-sized flight departments dispatch planes and crews as safely, accurately, completely and quickly as the largest and best-equipped flight departments.

Three marketing takeaways from our conversation with Lindsay:
1) Do What You Know
2) Do it Better Than Anyone Else
3) Recruit Allies 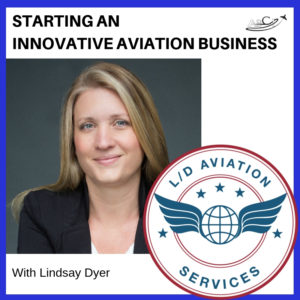 Lindsay:            Usually between one and three aircraft is a good fit for us. Once you hit past the three aircraft and you get into four, usually you have a larger flight department and have enough need for a full time person. But if you have just one airplane and you might need help with your scheduling or calling FBOs, shopping fuel, getting transportation set up, hotels, car rentals for the crew, catering, we can do all of that.

Lindsay:            We also help pick out the right airport, we can be the liaison between your admins and the crew, and we can have an entire trip set up and executed, basically, without having to bother the crew with many of the details. So essentially, they can show up to the airplane the day that they have their trip, fly the trip and all the details will have already been arranged.

Paula:               I was just going to say, so traditionally, in a lot of small organizations, all of this has fallen on the chief pilot or the pilot for the flight, and so they end up working a lot harder not flying. Their time off is not really their time off because they’re doing-

Lindsay:            Exactly, yeah. Even if they’re not flying, they are working. A lot of times, they’re talking to the admins. They’re scheduling the airplane. They’re talking to the FBOs, they’re getting pullout setups, they’re getting fuel releases set up. And all of that cuts into their time off. And we’re having a big problem keeping good pilots employed because they can easily just go to the airline where, again, they just show up and everything is done for them. So we aim to help ease them of that. [crosstalk 00:07:48].

Lindsay:            Yeah, and we like it. I’ve been doing this for, gosh, about 20 years now, and I enjoy doing the work, I love finding ways to make life easier for everybody and ways to save money. We usually take a trip, from the beginning, when it is requested from the owner or the executive, and we’ll schedule it, we will do all the catering, all the details. We will also put a package together before the crew leaves so they have in hand, paperwork that shows all the passengers’ names. Then we watch the whole trip as it’s executed, we’re checking on transportation, making sure that is in place as necessary. And then when the airplane comes back, we help with the reporting of it. We have to make sure that the right passengers are on and charged the correct way. We also work with, we can do the flight logs. And then we can report on everything at the end.

Lindsay:            We sure do, yeah. We wanna make sure that that is exactly the way the crew wants it. And that’s something that we set up in advance. We talk to the crew and we say, “Well, what are your requirements? Five thousand foot runway, a hundred feet wide? What do you want us to have?” And, yeah, every time we choose an airport, we’ll make sure it has those things, really, according to whatever they want. Each flight department is different. Everybody’s gonna have different parameters, and we adjust to that.

Paula:               That’s really smart. John, I know you’ve talked to some companies that talk about retaining pilots, and the three things that pilots look for are money, schedule and something else. I don’t remember what the third thing is. But the schedule, this part I think, this is one of the things that I think is really cool about what Lindsay does is, let’s their off time be their off time, right?

Lindsay:            Pay, time off, quality of life, that’s a big thing. The less turnover you have in a flight department, of course, is gonna make it feel more stable, especially to your passengers and owners as well. So we like to help with that. We also feel like sometimes or many times, the chief pilot who might be doing these jobs could be doing or using their time doing a better or different project. Perhaps they have an SMS or an ERP that is not completed or not very good. If they can focus on those, although we can help with those as well, but if they can really focus on that because they have the extra time so they don’t have to call the FBO or track down the catering receipt or any of those admin type details, then I think that just makes the flight department safer overall and a better run.

Paula:               Right? Oh, that’s fantastic. So, I know you’ve helped a lot of people over a lot of time for different companies and things like that. Do any examples really stand out for you?

Lindsay:            I think transportation is a giant issue. It’s hard to get that right every single time and I feel like the passengers, they can have their pilot and crew fly through thunderstorms and across mountains and do a big, long cross country leg, but if when they get there to their destination and their car is not right, it feels like the whole trip is [inaudible 00:12:07]. So, yeah, actually, we had one today. And today was an example because we left, I don’t know, thirty minutes early or so, and the car wasn’t in place and it was only a 45 minute flight. So we had to kind of scramble to make sure that that car got their earlier.

Lindsay:            If you’re crew and you’re doing all that, you’re not only flying a short leg, which doesn’t give you a lot of time to just hang out in the cockpit, you don’t necessarily have time to call Carrie or whoever’s transportation company it is and make sure that they get there on time. And that’s where we come in. We call, we make sure that person, that driver is there on time. And today, they landed about 38 minutes early and their driver was there.

Lindsay:            Right? Yeah. Yeah, and then, oh my gosh, I feel like we help in other ways. Like, sometimes, we have had an international trip before that really had a lot of changes to it. And instead of having … It was night time over there in Europe when we got all the changes, and instead of having to keep the pilot and the crew up until really late at night arranging all the extra details, we did that.

Lindsay:            So when they woke up the next morning, it was all set. The agendas were already sent to the new airport. NOTAMs had been checked. Flight plans had been filed for the new times. All they really had to do was get up, got all their stuff and showed up at the airport at the right time.

Lindsay:            Passenger catering is all done. So what we hope to do is to make their lives easier, which in turn, we think makes, again, the flight department safer.

Paula:               Right? The whole point, I think, of private aviation, is convenience. So if it’s inconvenient to use your own plane and your own crew, or if it’s inconvenient to your crew, you’re really not saving anything, you’re actually making more headaches for yourself. So I can see how offloading some of that to you is gonna really help simplify and help people get the most out of their flight department or their airplane.

Lindsay:            Yeah, which in turn, will hopefully keep that flight department running. None of us wanna see any flight departments closing and we see that periodically. And a lot of times, it’s because of bad management. And perhaps, some of what we do could help streamline that, make it look to the passengers like everything is rolling right along and there aren’t issues.

Paula:               Yeah. You know, the old metaphor of the duck sitting on the water, on the surface, everything looks calm. And under the surface, they’re paddling like crazy. So you remember that paddling and help them look a little more serene, right?

Lindsay:            Yes, right. Yep. And yeah, that’s really the goal of it, so that that passenger has a good, solid, well organized trip every single time.

Lindsay:            Yeah. You know, probably like many people, is that Top Gun movie. I grew up with that. I watched that probably a million times. And I hear the sequel is coming out next year.

Paula:               Right. There are some women fighter pilots and they are badass. They are very, very cool. I’m not sure when that started, but yeah, that’s amazing. So that’s great. What is your favorite airplane?

Lindsay:            Okay, so favorite airplane. If I was gonna fly one myself, I think I would aim for a Polaris. It feels like the Polaris is really versatile and I could probably stuff a bunch of my friends in and all their bags and their dogs and I think I would enjoy that. I would love going on trips that way. As far as scheduling the airplane, I love the G650 of course. Super long range, easy to schedule, I can go in and out of a ton of different places. Such an awesome airplane to schedule.

Lindsay:            It does, it really does. I can do short hops with it and it’s a beautiful airplane anyway. It’s so spectacular to look at on the ramp.

Paula:               Right. Okay. So how can people who need help with their scheduling and dispatching, how can they get in touch with you?

Lindsay:            Yeah, so we would love for you or anybody to check out our website, which is flightschedulingconcierge.com. Or you can try LDAviation.net. And you can try my cell phone also. It’s 404 775 6367 and you get me directly. That’s another big thing I think that we might have lost is the customer service aspect of many businesses. And when you call, you’re gonna talk to me. And I do a lot of the work. Laurie works with me, but we pride ourselves in answering the phone every single time, pretty much any time.

Paula:               That’s huge because there’s so many companies you call and you get a phone tree and you’re like, “I need help right now and I don’t wanna talk to this machine.”

Lindsay:            Right, yeah. You’re not gonna get that with us. And we wanna be part of the team. We wanna make your whole team look great. We wanna be a piece of that. We are not ever going to be, we don’t want to be a giant company. We want to have the clients that we work with and serve them well every time.

Paula:               That’s fantastic. Well thanks, Lindsay. We really appreciate you spending some time talking to us about a business that not many people know about. So that’s really cool.