Marketing Plans – The Tortoise vs. The Hare 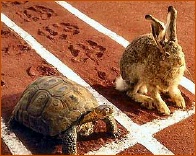 Several years ago, the regional bank I was working with (doing online marketing, of course!) was acquired by a much larger, national bank.   I was invited to be a part of the merger team. Which meant that I got a backstage, all access pass to the most massive marketing sprint I’ve ever seen.

We made huge media buys in the regional area – radio, TV, magazines, newspapers.  We scheduled press conferences. We hired contractors to change signage and remodel interiors of bank branches and paid them extra to rush the job stealthily, in stages, over weekends.   We designed and printed mountains of stationery and brochures.We created new web content and social media campaigns. We had huge meetings with huge pots of coffee.  We wrote (and re-wrote) marketing messages, press releases, FAQs and talking points.

We scheduled every single employee who had contact with the public or the media for a half day of “brand camp” – employees learned the history and great stories about the big bank and its founders.  They learned how to refer to the bank, products and services in the preferred ways. They learned the key advantages of the new products over the old.They played role-playing games (taking turns being the “skeptical customer” and coming up with questions about how the merger would affect their personal accounts and banking business.)  They even learned how to “press check” printed materials for the right colors and fonts.

Nobody on the merger team got much sleep for three months. We worked sixty to eighty hour weeks. Nobody DREAMED of taking a vacation.  Of course, everybody NEEDED one when we were done.

This was a big, fat, fast, furious Hare.

Most companies, under most circumstances, are much better off with the Tortoise.

Number sixteen (and finally, the last) of Jay Levinson’s Sixteen Monumental Secrets of Guerilla Marketing is this:

After you have a full-fledged marketing program, work to augment it rather than rest on your laurels.

Notice that he did not say “recreate it from scratch.”

The companies we work with, even if they had the resources of the huge bank we talked about in this story, would waste a lot of time, money, and energy on campaigns like this one.

Customers may like new twists, but they love  (and they buy) consistency. They spend their money on companies, products and services they can rely on.We recommend that our clients spread their marketing resources throughout the year.   A long-term, steady commitment is much better than a short-term fling.   People have amazingly accurate B.S. meters, and they will go off like a fire alarm when companies give something a half-hearted short-term shot.

In our Marketing Master Class, we discuss one topic in depth each month. In July, it will be  Referral Marketing. Last month, it was Trade Shows. The month before, it was LinkedIn.

Class members learn one new thing a month, decide if it’s appropriate, and slowly implement it along with the rest of their marketing.   There is no recreating an entire system from scratch, no multi-million dollar sticker shock, no eighty hour workweeks.

While there may be mini-sprints, such as using multiple media and launching a product during a trade show; successful overall marketing efforts resemble a marathon run at a steady, winning pace, rather than a breakneck 50-yard-dash.

Show customers that you’re in it for the long haul but continually making improvements and upgrades that match with your overall plan. Here are some suggestions:

The days of the media blitz are over.  These days, even when we see a huge merger of companies or launch of a new product,  even the biggest companies realize you can’t monopolize the airwaves like you could when there were three TV stations, five radio stations and two newspapers in every town.

Even if you could monopolize the airwaves, (like they do on the TV show Mad Men)  it takes longer to win over potential customers than it did then. It’s actually more efficient to invest the time, energy and money building trust and credibility over the long haul..