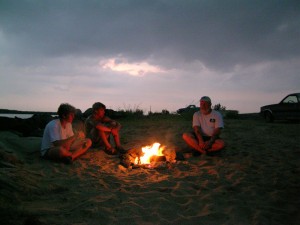 Nobody cares about your sales and marketing objectives, but everyone loves a great story!

Will Rogers once said something like this –  “It’s hard not to like a man once you know his story.”

Frankly, nobody cares about your marketing goals, and very few people are probably passionate about the product or service you offer.  But everybody loves a great story.

Businesses that tell great stories get great press, get people talking about them, and make more sales. When you think about companies with great stories, you might think about Harley Davidson, Wells Fargo, and Franklin Covey.

Harley Davidson has consumers so passionate they have the Harley logo tattoos. People strongly identify with its comeback story, and its cultural message and they want to be part of the “tribe.”  Wells Fargo sends its stagecoach to parades and events to remind people of its long history of supporting Westward Expansion and the gold rush with its commitment to customer service and the security of its customers’ assets.

Speaking of great stories, do you know where the term “riding shotgun” came from?

When my brother and I were kids, we each hurried to call “shotgun” to claim our turn in the front seat of the car.

Neither of us knew at the time (but I later learned when I worked for Wells Fargo)  that the term came from the “shotgun messenger” who sat next to the driver in the front of a Wells Fargo Stagecoach. The “shotgun messenger” was responsible for quick pickups and deliveries, as well as security of the stagecoach while it was on the road.  Needless to say, a loaded shotgun was necessary equipment in the Wild West.

Anyone who has ever carried a Franklin Planner (and there are lots of us out there, though most of us have switched to iPads) has doubtless heard the story of Benjamin Franklin’s obsessive use of little notebooks in a quest for personal effectiveness and self-improvement.

Southwest Airlines even turned its origin story into a children’s book:

Some of the incumbent airlines of the time (Braniff, Aloha Airlines, United Airlines, Trans-Texas, and Continental Airlines) initiated legal action, and thus began a three-year legal battle to keep Air Southwest on the ground. Air Southwest eventually prevailed in the Texas Supreme Court, which ultimately upheld Air Southwest’s right to fly in Texas. The decision became final on December 7, 1970, when the U.S. Supreme Court declined to review the case without comment.

The story of Southwest’s legal fight was turned into a children’s book, Gumwrappers and Goggles by Winifred Barnum in 1983. In the story, TJ Love, a small jet, is taken to court by two larger jets to keep him from their hangar, and then to try and stop him from flying at all. Taken to court, TJ Love’s right to fly is upheld after an impassioned plea from The Lawyer. While no company names are mentioned in the book, TJ Love’s colors are those of Southwest Airlines, and the two other jets are colored in Braniff and Continental’s colors. The Lawyer is designed to resemble Herb Kelleher. The book was adapted into a stage musical, Show Your Spirit, sponsored by Southwest Airlines, and played only in towns serviced by the airline.

The History of Southwest Airlines, AvStop.com

At ABCI, our mission is to improve the profitability of the business aviation industry one company at a time.

Great storytelling is a big part of that mission.

Here’s a negative example of how powerful a story can be:

Part of the reason private aviation has been so vilified in the press is because “the other side” has done a better job of storytelling.  Brian Ross’ 2008 story on ABC News’ Good Morning America about  the Big Three automakers arriving in separate private jets  (plus the spin from other news outlets and even lawmakers) did so much damage to the image of private aviation that five years later businesses are still feeling the need to justify their use of private aviation as a business tool.

NBAA, to its great credit, has taken on the challenge of telling the stories of business aviation customers and operators in part with its “No Plane No Gain” initiative, but it’s really up to each individual company to tell its own story.

There is understandable resistance to this idea – it takes a lot of courage to speak out in a traditionally conservative industry. Many of our clients and their clients are reluctant to reveal much about themselves in a sometimes hostile media environment.  But it’s up to CEOs and business owners to tell the stories of their businesses, products, services and people with passion,  authority and courage.

Here are some great examples of success stories from the business aviation field:

Eaton’s Aerospace Group Wins, Supports and Wins Again  – This Story about Eaton’s development of a HPGS (Hydraulic Power Generation System) for the  LearJet 85.  We like the way this story is told and structured – Background, Challenges, Solution, and Result – this is a great structure for any case study or story.

Gulfstream IV SP Aircraft Renovation – Before and After  – This is the story of a problem solved by Dallas Jet International (DJI) founder and CEO Brad Harris in which an airplane given a new life with out-of-the-box thinking and great partnerships.  This story includes before and after photographs – a dramatic transformation is always a powerful element in great storytelling. (Think of all the rags-to-riches stories you’ve heard!)

Passing it On – This is a story written by Special Service Corporation (SSC) Chief Pilot Eric Groves about his experience watching his son grow up and follow in his footsteps, leading up to Jonathan Groves’ first solo at the age of 16.  This has all of the elements of great storytelling – the story and pictures make us identify strongly as pilots worried about the future of the industry, and as parents who care deeply about our kids.

Disclaimer – SSC and DJI are  ABCI clients.  Of course we have an interest in promoting their stories!

Here are three questions that will help with writing, improving, and communicating great stories about your business:

In any political campaign it becomes obvious that the party that “controls the narrative” (tells their side of the story best) wins.  The same is often true of companies competing for business.  All other things being equal, (and sometimes not even close to equal) we spend our money, our time, and want to be associated with the companies that tell the best stories.

There is a Native American proverb that says “Those who tell the stories rule the world.”

Need some assistance getting your stories told?  Find some time on my calendar and let’s talk about your objectives and how ABCI can help!

Made to Stick (Chip & Dan Heath)

Show Me the Numbers

The Back of the Napkin (Dan Roam)

The Joy of Statistics (BBC)
http://www.bbc.co.uk/programmes/b00wgq0l

Persuasion and the Power of Story (Jennifer Aaker)
https://www.youtube.com/watch?v=AL-PAzrpqUQ&feature=kp