Skip to content
Home|Uncategorized|Commissions and Bonuses – Pragmatic Generosity?
Previous Next

Although our mission is aviation marketing, this week we’re going to start with a story about waiting tables in a restaurant.

Bear with me, there is a point to this story.

When I was in high school, I waited tables at a restaurant. 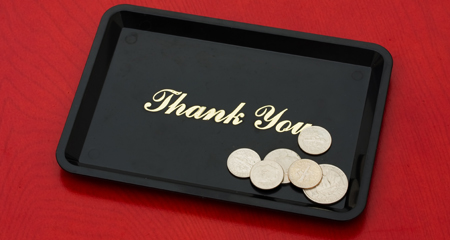 I noticed that one of the older, wiser waitresses discreetly tipped the hostess. (The person who seats customers, hands them a menu and gets them a beverage.)

I thought it was a nice gesture, after all, I was a still living at home with my parents and was just working for “fun money.” A lot of these people had families to support.

So, I also (discreetly) shared tips with the busboy and the cook. So I slipped each of them about $10 each on the nights that I worked.

But I noticed something. Instead of $80 to $100 per night, I started making $120 to $150 per night. Even though I was “spending” $30 tipping my three co-conspirators,  I had stumbled into a very profitable habit.

The busboy, given a choice, would clear my tables first, making them available for new customers.

If the hostess had any “gray area” about which people to seat where, she would more likely make sure my tables were filled.

The cook suddenly acquired the magical ability to decipher my scribbled handwriting on orders much more accurately, and honored requests for “XTRA CRISPY BACON” and “SAUCE ON THE SIDE.”

This system worked great for me, even though there was some grumbling among the other waitresses and management, and they might have eventually made some rule against it, but it was a short-term job for me anyway.

So, back to aviation marketing.

Most commission and bonus systems we’ve seen have a serious flaw.

By setting up complicated and bureaucratic systems for commissions and bonuses,  you’re setting up a complex, antagonistic game that everyone loses.

Every time a new customer comes in the door of some businesses, (or even before the transaction takes place) there are ridiculously Machiavellian games taking place among the sales and marketing staff whose livelihood depends on commission and performance bonuses.

These bizarre machinations may happen in the open around table a company conference room or “under the table;” and might include such shenanigans  as these:

So, we have very smart people creating and administering bonuses and incentive systems, resulting in manipulation, gaming and resentment; versus a very naive and unsophisticated “system” that resulted in greater profits and customer satisfaction.

Informality is an advantage.  Any formal system sets up an “entitlement mentality.” (yes, John, I realize we’re going to get hate mail for this.)

People psychologically put money into two categories – expected and unexpected.  Expected money includes their salary, projected commission, etc.  They consider it “theirs” even before they actually posses it,  unless there is some horrible mishap like getting fired.  If for some reason, a deal falls through and they don’t get “their” commission, they’re miserable (as is everyone around them) for weeks.

And as we all know, there are MANY reasons for deals in the aviation industry to fall apart, that are beyond the scope of control of anyone in our company or the contacts and prospects we’ve been doing business with.

This is not to say that you shouldn’t pay a great salary and/or have a great commission structure.  The best people expect, and earn every penny of it.

But when faced with the decision about how to structure an incentive program or tweak an already complicated commission system, you may be overthinking it.

Nobody sets out to create a messy and complicated commission and bonus system – it’s almost always started simply and with the best of intentions, then continually “tweaked” to suit every new situation that comes along until it’s just about unrecognizable.

There is something to be said for benevolent dictatorship as opposed to bureaucratizing and codifying every transaction.

Check with legal counsel if you need to, but you may find that there is nothing wrong with rewarding people unexpectedly when you notice they’ve worked particularly hard on a contract that just closed.

As the sales manager, CEO (or any kind of “boss” for that matter) you will probably find that personal discretion is often a lot more accurate than any commission system that you can devise.

Any system you put in place will also obligate you for (possibly) years in the future to defending it in circumstances where it seems “unfair.” The more complicated it gets, the weirder (and usually less fair) the results.

We have to accept that life isn’t fair, and no commission system is going to be perfect.

There will be grumbling either way.

And the boss isn’t always going to be right.

But we believe the boss is right more often than just about any “system” that can be devised, and retaining personal discretion in the matter of bonuses and commission is much more successful than any other system we’ve seen. .