There are three reasons you need to know how to tell a story.

Some people seem to have a natural knack for telling stories in a really compelling way.  But anyone can learn to be better at it. Whenever you find yourself bored while someone is telling a story, it’s because they’ve missed one of these three things.

I happen to be better on paper than “in person,” but we’ll do our best.

The Rule of Three applies when learning how to tell a story. 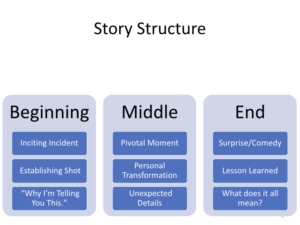 Every story MUST have a beginning, a middle and an end.

The “insides” of each section can be a little more flexible, but MUST contain at least one these elements.

Every Beginning has to have an Inciting Incident, an Establishing Shot, and/or an explanation of “Why I’m telling you this.”

This sets up the story and tells the listener what to expect.

Every Middle has to include a Pivotal Moment (Agatha Christie, Clive Cussler and others are masters of the Pivotal Moment!) and/or a Personal Transformation, and/or Unexpected Details.

Every Ending has to include a Surprise or Comedy, a Lesson Learned, and/or a “What Does it All Mean?

The simplest story to tell is probably a joke – even so, it has all of the elements:

Beginning – “A man walks into a bar” (Inciting Incident)

A man walks into a bar and orders three beers.

The bartender brings him the three beers, and the man proceeds to alternately sip one, then the other, then the third, until they’re gone.

He then orders three more and the bartender says, “Sir, I know you like them cold, so you can start with one, and I’ll bring you a fresh one as soon as you’re low.”

The man says, “You don’t understand. I have two brothers, one in Australia and one in the Ireland. We made a vow to each other that every Saturday night, we’d still drink together. So right now, my brothers have three beers, too, and we’re drinking together.”

The bartender thinks it’s a wonderful tradition, and every week he sets up the guy’s three beers. Then one week, the man comes in and orders only two. He drinks them and then orders two more. The bartender says sadly, “Knowing your tradition, I’d just like to just say that I’m sorry you’ve lost a brother.”

The man replies, “Oh, my brothers are fine — I just quit drinking.”

In the video, John shares a story about evading the police (I’m sure the statute of limitations is over for this.)  I tell the story to a crowd of girls in India about how to choose a good husband, and a great celebrity example. 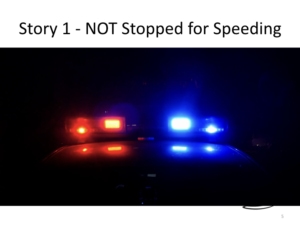 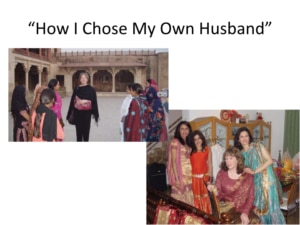 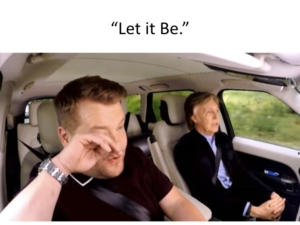 Whether you’re telling your stories on your own aviation website, in a brochure, or in person at a networking event or in a sales conversation, or even convincing your kids to eat their vegetables, it will make you MUCH more successful if you know how to tell a story well!