We liked it more than we thought we would – quite entertaining, and with some great stories. 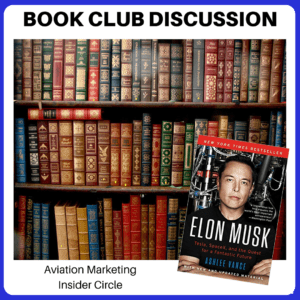 Although biographies are not my favorite thing, I have to say we probably enjoyed this book more than we thought we would, which is probably a compliment to Ashlee Vance to highlight very “human” vignettes about his subjects.
While I had put off opening this thick, black tome, I loved this bit from the introduction:
“Eighteen months earlier, I’d informed him (Musk) of my plans to write a book about him, and he’d informed me of his plans not to cooperate.”
Of course, Musk eventually gave in and met with Vance for some fairly regular interviews once Vance had proven his resolve, and often those dinners started out with a discussion of Musk’s low carb expectations and ended handfuls of a giant, sugary dessert.
This is a guy I can relate to!
So, what’s the difference between this ultra-high-achieving billionaire and the rest of us?  From my reading, it boiled down to four key points. 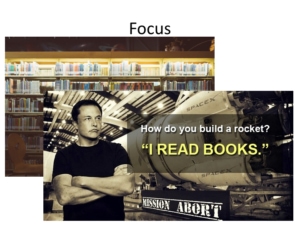 One factor that seems less and less common these days – being able to focus on one thing without succumbing to the constant distractions of technology.
For Musk, this started early – getting engrossed in a book in a bookstore while his family was shopping at a mall in South Africa, eventually finding the young Musk in a chair claiming he hadn’t heard their calls.
Long Dungeons and Dragons games.  Frequent daydreaming episodes that were an interruption to school and games with friends.
To those of us who were kids like that, or HAD kids like that, this is good news! It’s a sign of great focus! 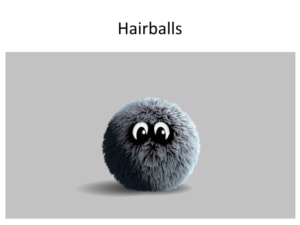 Computer programmers use the term “hairballs” to describe bits of code that do accomplish a specific task, but that don’t interact well with the rest of the program, and that are hard for other programmers to work with because they don’t have “clean” inputs, outputs and documentation.

High-performing people, especially founders of companies, often hit a point where they HAVE to delegate in order to grow, but they’ve created “hairball” systems with their website, their billing systems, and their marketing that are just easier to manage themselves rather than get someone to help them.

Growing past the stage of “hairballs” is critical to get through that dangerous phase of having to do everything yourself and trusting that someone else can do the job as well, even if it means untangling some of the systems you’ve created.

The story of Musk going through this stage with Zip2, his first company, involved late nights of Musk rewriting code because the work of his employees didn’t satisfy him, literal knock-down drag out fights with employees and partners (also rash young men and good friends) was refreshing to me, since I’m currently dealing with issues of delegating to an assistant when it’s “just easier” to do it myself! 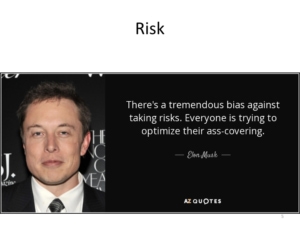 Musk has a legendary tolerance for risk.

A few of the interviews with Musk’s associates highlight the anxiety of some of his colleagues over some of the “high risk” decisions he makes.

Musk seems to have a pretty high tolerance for personal discomfort and anxiety – he grew up fairly rough, bought a ticket for Canada based on a hope in the couches and hospitality of distant relatives.  He slept on a beanbag chair in his first office.

I think this disdain for personal comfort really helped him make some of the more “risky” decisions- He’s been broke and has no fear of it.  He doesn’t feel the need to coddle investors  or other authority figures.

This may be out of place in a marketplace where investors demand quarterly earnings reports (and presumably, quarterly improvement) but it’s essential to any mature business to make decisions that may be temporary setbacks. 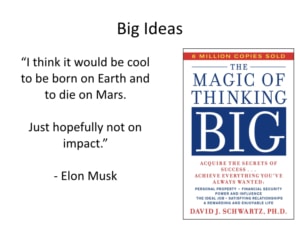 People wonder how Musk can successfully run three companies – Tesla Automotive, Solar City, and SpaceX.
The simple answer is that they all address a single big idea – saving humanity.
Musk survived being an environmentalist in South Africa (definitely not cool) and a bookworm and academic nerd (not cool) and a great many other things in opposition to the people around him. 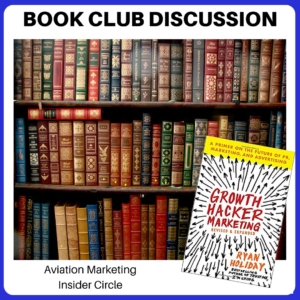 Definitely worth a read for the four reasons we discussed.  I’m glad we read it, still not a huge fan of biographies.
Next month – we’ll be reading Ryan Holiday’s Growth Hacker Marketing.
Want to join us?
Learn more about our Book Club and our Marketing Lab here!